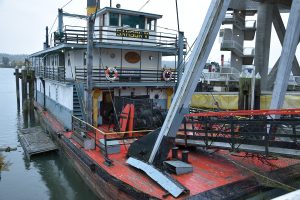 The Samson V stern wheeler, berthed in New Westminster, was launched in 1937 and served as a snag boat on the Fraser River. Its job was to remove logs and other obstacles in the river that would interfere with vessels and fishing. It was turned into a floating museum after being decommissioned on Halloween in 1980. The boat is haunted by the ghost of a crew member who died on board it in the 1940s.

My paranormal-investigator friend, Amanda Quill, and I recently spent a couple of hours with CTV News Vancouver reporter, St. John Alexander, on board the Samson V. We were there to record a story about its ghosts for the Haloween 2022 season.

Check out St John’s story about the haunted boat on the CTV News Vancouver website, and click on the video to watch it.

As he always does when he covers haunted locations, St. John did some very cool videography and editing. In the video I comment a couple of times about the haunted boat and play the ghost (leaning over the boiler).

I’m excited to report that while on board the Samson V, I saw a shadow figure move inside the galley. This isn’t featured in St. John’s story, as he was in another part of the boat videoing at the time. My sighting was very brief and had me shaking my head at what I witnessed. But I’m convinced it was genuine.

Amanda heard footsteps and picked up on the ghostly presences, too.

The Samson V is a fabulously haunted, atmospheric location! I plan to add a new chapter about it in the next edition of the Ghosts of Vancouver book, which I’ll publish in October 2023. 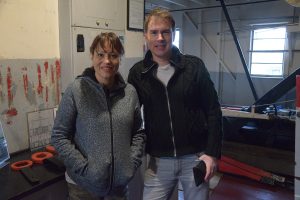 Amanda Quill, left, and St John Alexander, right, on board the Samson V.