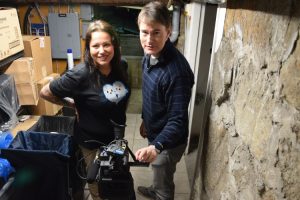 A few days ago, Amanda Quill of Coldspotters and I spent some time in New Westminster with St John Alexander of CTV News Vancouver.

Last October, St John and I filmed a story about the ghosts of Waterfront Station. We had a great time doing that, and the piece aired on CTV News at Six (Vancouver) a couple of days before Halloween 2019.

St John got in touch last week to say he was keen on doing more ghost stories for this year’s spooky season. He wanted to focus on haunted places in New Westminster. I suggested we visit Kelly & Carlos O’Bryan’s restaurant and Irving House (both of which are featured in Ghosts of Vancouver: 39 Haunted Places

We all met up at O’Bryan’s. They gave us privileged access to its basement storage area where disembodied voices have been heard. St John interviewed me about its ghosts and filmed Amanda doing some investigating. Then we both watched as he did some video-camera wizardry to get atmospheric shots of the underground area.

We ate a delicious lunch in O’Bryan’s, which they kindly gave us free of charge. Then we moved on to Irving House.

At Irving House we met museum curator, Oana Capota. St John interviewed her about the house and what she knows about its resident spirits. And in between filming our interviews and action shots, Oana kindly gave Amanda and me separate tours of the place. 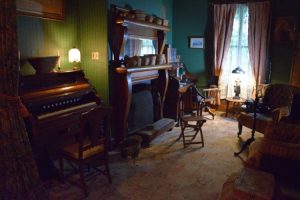 The Library at Irving House

It was truly amazing to see the inside of Irving House! It’s like a time capsule from over 120 years ago. Original furniture and household items from the late 1800s imbue the place with history. Oana showed me the infamous bed in an upstairs bedroom where a ghost was seen in the 1960s. Downstairs, the small library on the ground floor drew my attention. This is where a weird light anomaly appeared some years ago. The library has a mildly dark, brooding atmosphere but the rest of the house evokes a warm, inviting feeling.

If you’re enthusiastic about places that are both historical and haunted, you should make a point to enjoy a meal at Kelly & Carlos O’Bryan’s restaurant and visit the museum at Irving House.

To watch these stories, tune in to CTV News at Six (Vancouver) during the week before Halloween.