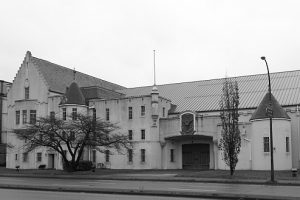 The Seaforth Armoury is the headquarters of the Seaforth Highlanders, a Canadian Forces reserve infantry unit. It also serves as the regiment’s museum and archives. The Seaforth Highlanders originally trained and paraded at the Beatty Street Drill Hall with the Duke of Connaught’s Own Rifles. Ultimately, though, the Canadian government built this separate armoury for the regiment. Construction began in 1935 and was completed in 1936. The regiment moved in that summer.

The Seaforth Highlanders vacated the armoury between 2012 and 2016, while it underwent seismic upgrades and some interior changes. They moved back in with a parade and celebration at the end of September 2016.

The Seaforth Armoury has a few ghosts. The best known is of a bagpiper. His pipe playing is heard throughout the building, especially in quieter parts. Nobody knows his identify for sure. But he’s believed to be one of the regiment’s pipers who was killed in action during World War I. The remains of his bagpipes were found in one of the armoury’s storage rooms many years ago.

In addition to the piper, many soldiers have heard phantom footsteps going down a hallway and up a staircase. The footsteps sound exactly like an infantryman walking in hobnail boots. (Hobnail boots haven’t been standard issue for the Canadian Forces in several decades.)

Others have seen a dark figure out of the corner of their eyes. And some soldiers have seen a shadow figure appear in upper windows when the building is otherwise empty.

Another ghost used to enjoy playing a prank by jiggling the latch on the old oak door to the officer’s lounge. When the door was opened, nobody was found on the other side. This door was removed and blocked in during the recent renovations. So the ghost isn’t able to do this trick anymore.

Much more information about this location is included in Ghosts of Vancouver: 41 Haunted Places.