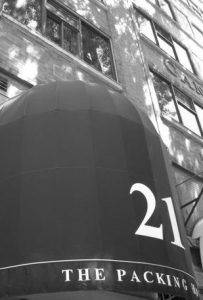 The Packing House stands on the site of the old Sunnyside Hotel. The Sunnyside was built in 1874 and rebuilt in 1886 after the great fire of Vancouver. The building that replaced the hotel is today’s Packing House. It was built in the early 1900s for the Swift Canadian Company’s meat warehouse and cold storage plant.

In 1969, the Packing House was taken over and renovated into a commercial office building. Today, it serves as a technology and entertainment centre. Its tenants include IT firms, film and internet production companies, and modeling, acting and talent agencies. From 1978 to 1995, the building also housed Punchlines Comedy Club, where such well-known comedians as Howie Mandel and Robin Williams appeared. The club later became a popular night spot called, The Purple Onion Cabaret.

The Packing House is home to a ghost who seems to like playing pranks. The former owner and operator of Punchlines, Rich E., heard his name being called when he was the only person in the club. Sometimes when he came into work in the morning, he found freshly lit candles without any explanation as to whom had lit them or how, being that the club had been closed and locked overnight. (Even so, Rich is skeptical about ghosts.)

Also, sound technicians would sometimes hear phantom tapping and whistling coming from microphones that had been placed on stage. The help that the ghost seemed to be giving them with their sound checks was far from welcome!