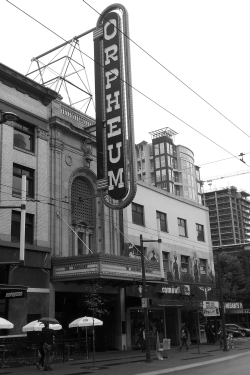 Originally opened in 1927, the Orpheum Concert Hall is one of Vancouver’s best-known live venues. It’s decorated inside with a lavish mix of Gothic, Moorish, Romanesque and Spanish Renaissance styles. In its first few years, the theatre hosted silent movies, vaudeville shows, and song and dance performances. During the Great Depression, however, vaudeville died out. So between 1931 and 1973, the Orpheum was primarily a movie theatre. It occasionally hosted live shows by such famous performers as Jack Benny and Frank Sinatra.

In 1974, the City of Vancouver bought the Orpheum to prevent it from being converted into a multiplex movie cinema. They closed it in 1975 for extensive renovations and re-opened it in 1977. Today, audiences flock here for Vancouver Symphony Orchestra performances, rock concerts, and other live shows.

Three ghosts haunt the Orpheum. The first and best-known is of a man who appears on stage. He’s mostly seen by staff members during closing hours. Others have seen a ball of light floating near the stage, which quickly vanishes. Some say the phantom was a high-flying acrobat who fell to his death while performing a vaudeville act during the theatre’s early years. But there are no records to confirm this ever happened.

The second ghost is the full-body apparition of a washroom attendant. He appears in the men’s toilet downstairs.

The third ghost is of a well-dressed lady, who’s seen in the upper tier of the audience section. She gives a standing ovation to an unseen performance and then vanishes.