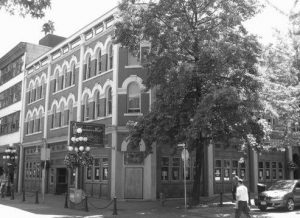 Opened in 1899, the Lamplighter Pub is one of Vancouver’s oldest bars. It’s situated on the ground floor of the Dominion Hotel. It was the first licensed establishment in the city to serve alcohol to women. The Lamplighter gets its name from workers who once lit gas street lamps in Vancouver in the late 1880s.

The Lamplighter Pub is home to an entity that likes to make its presence known near the bar. One night after closing, a bouncer who was alone in the pub heard the loud clanging of wine glasses hanging in racks over the bar. This sounded like someone had run a hand along them. When he investigated, the glasses were perfectly still. The bouncer couldn’t find any explanation for what he’d heard.

On another occasion, a server watched in amazement as an empty glass levitated off the bar top by itself. It dropped to the floor behind the bar, where it smashed to pieces.

An old sleigh that’s displayed inside the pub, above the door to Water Street, used to have a mannequin seated in it. Some servers saw the mannequin move by itself more than once.

More information about this location and its ghost is provided in Ghosts of Vancouver: 41 Haunted Places.