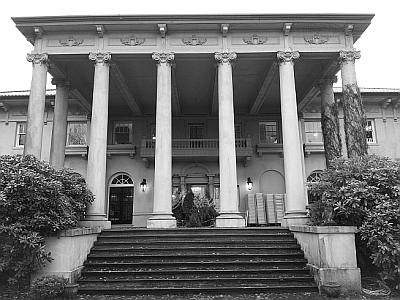 Hycroft Manor is a stately home located in the upscale neighbourhood of Shaughnessy. It was completed in 1911 for General Alexander Duncan McRae. In his illustrious life, McRae was a World War I hero, businessman, and politician. In the 1920s and 30s, the General and his wife, Blaunche McRae, hosted many high society parties in the house. These gatherings were famous amongst Vancouver’s social elite, especially their New Year’s Eve masquerade balls. Their guests included royalty, high ranking politicians, and high-profile businessmen and their wives.

In 1942, the McRaes donated Hycroft Manor to the Canadian Government. It was repurposed by the Federal Department of Veterans’ Affairs as a convalescent hospital for war veterans. Mrs. McRae died soon after leaving the house. General McRae (then Senator McRae) died in Ottawa in 1946. The manor was a veteran’s hospital until 1960, when it was left vacant and in a sorry state. Then, in 1962, the University Women’s Club of Vancouver (UWCV) purchased the place. The UWCV soon restored the manor to its former glory. To this day, it maintains the building and grounds in immaculate condition. Only occasionally open to the public, Hycroft Manor now serves as a first-class venue for various UWCV meetings and events, private weddings, an annual Christmas craft show, and other special gatherings.

Hycroft Manor is easily one of Vancouver’s most haunted locations. Seven ghosts are known to roam this 20,000 square foot, 30-room structure. The first ghost is of an older man dressed in a World War I officer’s uniform. He’s widely assumed to be the ghost of General McRae.

Another apparition is that of a well-dressed lady, who is believed to be Mrs. McRae.

Of the other five ghosts, one is a woman in a nurse’s uniform. She’s thought to be a head nurse from when the mansion served as the convalescent home. The apparitions of three army veterans have been seen in various parts of the house. They’re known as “The Pranksters” by mansion staff because they open and close doors and cause lights to flicker. The seventh spirit is known as the “Crying Man” due to his loud sobbing that’s heard coming from a room on the lower floor.

Once, during an all-night investigation in the 1990s, a paranormal researcher saw a football-sized black orb float over a dining table in one of the rooms, right in front of him.

Despite there being so many ghosts in the house and the sighting of a black orb, UWCV representatives say that the spirits haunting the manor are mostly peaceful and protective of the place.