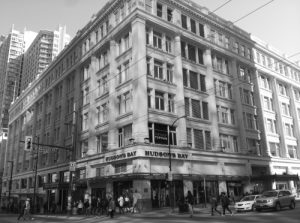 Adapted from an original blog article by Shanon Sinn – http://livinglibraryblog.com

If you live in Vancouver or have ever visited, you’ve probably been inside the Hudson’s Bay store on Granville Street. Perhaps, while shopping there, you felt a strange presence. Regardless, it probably never occurred to you that many people who’ve worked in the building over the years have had what some would call a personal experience with the paranormal.

Historically, the Hudson’s Bay Company (HBC) was largely responsible for shaping Canada and much of the United States. It brought British law and culture to the New World, along with the business empire they built on the fur trade. The HBC was chartered in 1670. What began as a fur trading company would, over time, become the Canadian retail giant it is today. The HBC has over 90 department stores in Canada. Many of them are old, and some harbour rich and dynamic histories.

The HBC’s downtown Vancouver store was built in phases starting in 1913, next to an original building dating from 1893. The latter was fully replaced by the HBC in 1925 during a third phase of construction.

Countless people have worked in the store over the years. For many of them, Hudson’s Bay was their life. Today’s employees who have strange encounters wonder whether the spirits of some of their predecessors remain in the store. The ghosts of some loyal shoppers may linger there, too.

Shanon Sinn, who wrote the original blog post on which this article is closely based, was Loss Prevention Manager (i.e., manager of security) at the Vancouver Hudson’s Bay store from 2001 to 2005. His duties included arresting those who committed criminal offences on or in relation to the property. He oversaw security camera installations, emergency preparedness, staff awareness training, and physical security of the building. And he was at the top of the list for responding to security alarm call-outs.

Shanon reports that, on more than one occasion, elevator doors inside the store opened up in the after-hours for no discernible reason. The next day when he reviewed the video recording for that particular zone, he could clearly see the doors open. The numbers above the door would show the elevator either going up to the second floor or down to the sub-basement. The elevator doors would then close, and the car would travel to the different floor. Once there, the doors would open up again. Each time the lift would be empty. The elevators involved were usually the customer elevators. But this also occurred with the staff elevator located in a back area.

At the time, Shanon spoke with the building engineers about the elevators operating on their own. They assured him that it was not technically possible for this to happen without somebody controlling them. Someone would have to push a button from inside the elevator or call it from the outside. Of course, nobody was caught on camera doing this. The engineers also explained that if it was a malfunction, the problem would have occurred more regularly. Furthermore, the elevators were old and not computerized. They couldn’t be programmed to operate on their own.

The store’s loss prevention office was on the mezzanine between the first and second floors, beneath the second floor washrooms. This office also served as the video monitoring room. On nights when Shanon or a colleague was in the office, the sound of squeaky wheels was sometimes heard coming from one of the washrooms above. It was clear from the security camera outside the door that no one had gone into or come out of the bathroom. When Shanon or a colleague would go upstairs to investigate, the sound would stop. Nothing would be found to have caused it. This was experienced by almost everyone on the loss prevention team. Some didn’t believe the noises were caused by anything paranormal. But nobody had a good explanation for what caused them.

Shanon had his most convincing experiences in the sub-basement. Again, the elevators would sometimes open up on this level of their own accord. The back corner of the sub-basement was another hot spot of activity. Here there was a staff kitchen and cafeteria that had at one time been a burger bar and soup counter. An alarm would often go off in this area, and Shanon had to attend to it no matter what the time was. If several motion alarms were tripped after hours, it was obvious that an intruder had broken in to steal merchandise. At these times, the police would accompany Shanon or a colleague to investigate.

If only one alarm went off, as it often did in the sub-basement, it was usually a false alarm. In those situations, and due to budget cuts at the time, Shanon would investigate without any back-up. Being alone at night in a partially lit, empty department store with no obvious cause for an intruder alarm made for some unnerving experiences. Every time Shanon responded to an alarm in the back corner of the sub-basement, he never found an intruder. To this day, he doesn’t know what set off that particular alarm. He hated checking the back corner of the sub-basement, because it felt wrong down there. It was often muggy with an electric heaviness in the air.

The kitchen staff kept an alarm clock by the sink in the back corner of the sub-basement. This clock’s alarm suddenly went off on two separate occasions when Shanon walked past it at different times of night. Shanon was so startled the first time it happened that he nearly jumped out of his skin. But he consoled himself that there must be a logical explanation for it. Even though he half expected it the second time it happened, he was severely rattled. It was more than just a coincidence.

The second experience with the alarm clock was immediately followed by what Shanon refers to as “the hallway incident.” Still in the sub-basement and shocked by the clock, he walked towards a door that led to a hallway with staff lockers and washrooms. This area was sparsely lit and had an abandoned, hospital-like look and feel to it. As he walked up to the open door, it violently slammed in his face. He was so wound up by this that he quickly reacted by kicking the door back open. There was nobody there.

“Okay. I get it. I know you’re here!” Shanon said out loud in an effort to sound confident. This helped him feel better and it seemed to work. All was quiet after that. The next day, he tried to recreate the slamming door but couldn’t. The door didn’t close that violently, and it was always kept open with a stopper in place. There was simply no rational explanation for it slamming the night before.

Nothing much happened to Shanon in the store after that, and he mostly kept his stories to himself. Being in charge of security, though, other staff members would sometimes tell him about odd experiences. A security guard told him that, early one morning, he came across a cleaning lady who was crying. She told him she’d seen the apparition of a woman in a red dress float along an aisle on the second floor. This cleaning lady requested to no longer work on the second floor, and soon after resigned. Still other staff members reported strange goings-on in the Seymour Room, a cafeteria-style restaurant on the sixth floor. Generally speaking, however, the second floor and the sub-basement are where much of the paranormal activity happens.