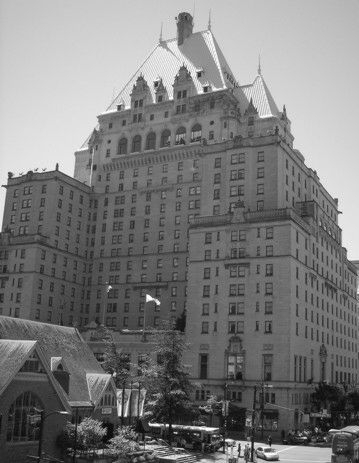 First opened in 1939, this elegant building is actually the third Hotel Vancouver. The first two were located on the south east corner of Georgia and Howe Streets. They were built and operated by the Canadian Pacific Railway in 1888 and 1916, respectively.

Today’s Hotel Vancouver is situated on Georgia Street, between Burrard and Hornby Streets. It’s one of several chateau-style hotels built by the Canadian National Railway in the early twentieth century. They include the Chateau Lake Louise in Alberta and the Chateau Frontenac in Quebec. The current Hotel Vancouver was restored in the mid-1990s. It features a steep-pitched copper roof, ornate dormers, and ghoulish gargoyles.

The Hotel Vancouver is haunted by a benevolent and elegantly dressed “Lady in Red”. She’s often spotted on the 14th floor, and is also seen in the ground floor lobby near the guest elevator doors. She sometimes passes through elevator doors on those floors and glides along the hallways. Most intriguing is that the 1st and 14th floors are the only ones with elevator doors that lead to a dummy elevator shaft. The ghost has been seen passing through those disused, locked doors.

The Lady in Red is also encountered in some of the guest rooms. Once, a Japanese family that checked into a room on the 14th floor called the front desk to ask whether their room had been double-booked. They described seeing the Lady in Red in the room, which had caused their confusion.

In another incident, a bellman escorting guests into room 1403 saw the Lady in Red follow his guests through the door into the room. When he entered, the lady had vanished.

More recently, disembodied footsteps and strange sounds have been recorded by security cameras in a stairwell near the 14th floor.

Some say the Lady in Red is the ghost of Jennie Pearl Cox. She was a Vancouver socialite who regularly attended the hotel’s ballroom dances in the early 1940s. Apparently, she took up eternal residence in the hotel after dying in a car accident in 1944. Whether she’s the spirit of Ms. Cox or not, the ghost is well known by the hotel’s staff.