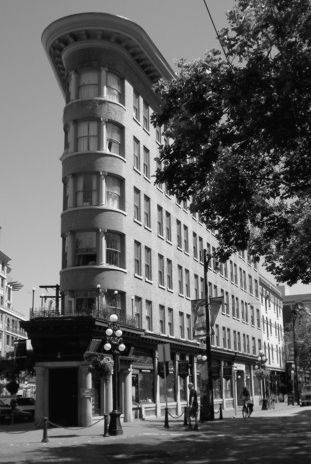 The six-storey flatiron building at the convergence of Water, Alexander and Powell Streets is the old Hotel Europe. It’s also known as the Angelo Calori Building, after the hotelier who had it built. It was purposefully situated close to the old steamship docks at the foot of Columbia Street. From there a bus would transfer passengers to the hotel. Completed in 1909, it’s the earliest reinforced concrete structure in Vancouver. To this day, it has its original Italian tile floors and leaded-glass windows.

During its first few years, the Hotel Europe flourished. In 1916, however, the second Hotel Vancouver opened across town. The popularity of that newer, grander hotel quickly shifted the heart of the city to the southwest, away from the area known as Gastown. The Hotel Europe soon lost favour and fell into disrepute as a brothel.

In the 1920s and 30s, the ground floor unit at the building’s apex, which is currently occupied by a poster store, was a beer parlour. In the basement below was its keg cellar. The cellar is still accessible today by stairs from the sidewalk-level entrance at the building’s apex. This underground area once extended beneath the sidewalk on both sides of the building in what were commonly known as “areaways”. Areaways were a typical feature of commercial buildings in Gastown. They were used to load and unload freight through trap doors in the sidewalk. The glass bricks in the sidewalks beside the Hotel Europe on Alexander and Powell Streets provided daylight to the areaways. The areaways were filled in and bricked up many years ago, however. What remains of the cellar is used for storage. And the upper floors of the building were converted into subsidized housing units in 1983.

The Hotel Europe houses one ghost for sure and possibly two. The first paranormal encounter was reported in the 1980s by a contractor. He was working on some repairs on his own in the cellar, close to a bricked-up areaway door. The contractor left the cellar briefly to fetch something and, when he returned, his tools were scattered all around the floor. He then heard scratching noises coming from behind the brick wall and felt a bad presence. Frightened, he quickly gathered up his tools and left the cellar as fast as he could. He flatly refused to work there again.

Scratching noises are still sometimes heard coming from the other side of the bricked up areaway in the cellar. It could be the sounds of rats or mice, but remember – the areaways were filled in years ago.

The second spirit, who could be same as the first, is the apparition of a man dressed in a black coat with a flat cap. He appears in the poster shop on the street level. One evening in the early 2000s, just after closing, the poster store’s owner saw the ghost clearly reflected in her convex security mirror, near the apex of the building. She was surprised to see him as she was sure the store was empty of customers when she’d locked the door. When she walked over to take a look, nobody was there. The man had suddenly and silently vanished. Shaken by the strange experience, she locked up and left in a hurry. She saw the apparition again on another occasion. Whoever the man is, he’s probably confused by a poster store there in the place of his favourite watering hole!

For more information on this location, see Ghosts of Vancouver: 41 Haunted Places.