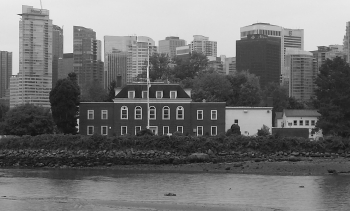 The aptly-named Dead Man’s Island is in Vancouver’s Coal Harbour, near Stanley Park. It’s been the home of HMCS Discovery, a Canadian naval base, since 1943.

In the 1700s the island was the site of a massacre of 200 warriors of the northern Coast Salish people. The Coast Salish often raided each other’s settlements and the confrontations were usually bloody. The southern Coast Salish captured some northern women, children, and elders and held them hostage on the island. When the men from the north surrendered themselves in exchange for the hostages, they were slaughtered.

Later, the island was a Coast Salish burial site. Cedar coffins were suspended in the branches of its tall evergreen trees. By 1870 the coffins were taken down and buried in Stanley Park.

From 1870 to 1887 the island was used as a burial site for white settlers. A few of the 21 people killed during Vancouver’s great fire of 1886 were buried there. So were several workers who were killed during construction of the Canadian Pacific Railway line from Port Moody to Coal Harbour. The deceased’s coffins were loaded into row boats, sent over to the island and buried in small clearings between the trees. During a smallpox outbreak in 1888, the city used the island as a quarantine area. Several victims of the disease were buried there, too. This must have been very convenient for the undertaker!

By 1911 the island was home to squatters, who built shacks along the shoreline. Between 1911 and 1939 there were various plans to build a museum, a war memorial, an amusement park, or a dance hall on the island. But none of those ideas were ever realised.

In 1942, in the midst of World War II, the federal government gave the island to the Canadian navy. HMCS Discovery was built the next year for the Vancouver Half Company of the Royal Naval Canadian Volunteer Reserve for recruitment and training.

HMCS Discovery got its name from one of the sailing ships Captain George Vancouver used to chart North America’s north-western coast. The city of Vancouver is, of course, named after him.

Today, HMCS Discovery still serves as a base for the Royal Canadian Navy Reserve. It’s also the headquarters of several other reserve and cadet units. A causeway links the island to Stanley Park, but because it’s a military base the public is not allowed to visit. A security gate stands on the Stanley Park side of the causeway.

Some reservists have heard disembodied voices, footsteps, and other unexplained sounds at the base. A few have seen apparitions. Others have been touched by unseen hands while alone in Building No. 1. This is where most of the paranormal activity seems to happen.

The base is usually locked and vacant at night. But Leading Seaman A.M. Hamilton had been given special permission to stay overnight in Building No. 1. On the first night, she was startled awake by the voices and footsteps of two men going up an outside staircase.  She heard the men carry on up the staircase to the third floor above. She then heard furniture being moved around in what was once the base’s radar room, right above her. This went on for over half an hour.

The next day, Hamilton spoke with the commissionaire who’d been on watch at the entrance gate the night before. He told her that nobody had passed through the security gate. When she’d heard the voices and commotion above her, she’d been totally alone on the island.

The next night, at about 1:30 a.m., Hamilton’s sleep was again disturbed. This time it was just the sound of furniture being moved in the room upstairs that woke her. She wondered whether it was the commissionaire doing security rounds. But that didn’t explain it. She should have heard his footsteps along the hallways, and the opening and closing of doors as he checked various rooms. But she hadn’t. Hamilton thought about looking to see what was causing the noises. She made it as far as the hallway outside her room, but felt uneasy and retreated back to bed.

In 1991 Leading Seaman C. Grahn was stationed overnight in Building No. 1 as a security guard. He was there because of the possibility of anti-Gulf War activists invading the base. In the middle of the night, he visited the bathroom. While sitting on the toilet, he heard the double-doors connecting the main building to the drill hall open, then close. This surprised him because he thought he was alone. Grahn radioed over to the commissionaire, assuming his colleague had made the noise while doing rounds. The commissionaire replied that he was at the front gate, not in the building. Grahn left the bathroom and searched the building, but nobody was there. He also confirmed that all the exterior doors were locked.

In 1992 Leading Seaman J. Eldridge was in an office on the ground floor of Building No. 1 doing some paperwork. He heard footsteps moving quickly down a nearby staircase. This got his attention because he assumed he was the only person on base at the time. When he investigated, he found that the lights were out in the stairwell and nobody was there. He phoned the commissionaire, who confirmed that Eldridge was the only person on the island.

As Eldridge hung up the phone, he was shocked by the sounds of scrapes and furniture being moved around upstairs. Mustering up his courage, he walked to the staircase. The sounds stopped. He turned on the light in the staircase, and nervously made his way up to the second floor. The area was in total darkness. Turning on the lights, there was nobody there and nothing had been disturbed. He carried on up to the third floor, switched on the lights and found the same thing – nothing. Completely unnerved, Eldridge turned out the lights, returned to the office downstairs, and quickly finished his work. He went swiftly home.

In 1994 Petty Officer R. Low was one of many reservists stationed at HMCS Discovery. They were using it as a base for a search and rescue operation. Early one morning, while lying in a cot in a room above the mess hall, Low heard voices and people stomping around downstairs. Only a few colleagues were in the building with him at the time, and none of them were downstairs. He therefore assumed that some reservists from Building No. 1 had come in and were banging around. He went downstairs to ask them to keep the noise down, but found the mess hall empty. And when he returned upstairs the noise started up again. He went back down and once again there was no one there. There was nobody at all on the ground floor.

It’s not known how Dead Man’s Island got its name. It’s most likely from having been a native burial ground. And no one knows where the long-forgotten graves are located. Considering the ghostly goings-on at the base, however, the island truly belongs to the dead.