Gaoler’s Mews is located in the heart of Gastown. The first building on this site was built in the mid-1800s. It housed Vancouver’s first jail. After it burned down in Vancouver’s great fire of 1886, it was replaced by a brick fire hall. Behind the building is a cobble-stoned courtyard, where a hangman’s scaffold once stood. There, in the mid-1800s, over 40 people were publicly executed.

Before it moved across the street in 2008, the popular Irish Heather pub was located in Gaoler’s Mews for several years (at 217 Carrall Street). There are at least three ghosts in and around the unit where the Irish Heather was, which today houses a restaurant called L’abbatoire. 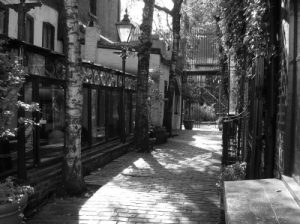 One of the ghosts is of a woman dressed in black. She’s sometimes seen behind the restaurant, gliding along the cobble-stoned passageway from where the hangman’s scaffold was. She glides southward to the end of the passage, where she passes through a wrought-iron gate leading to Blood Alley. Once through the gate, she vanishes. Some speculate she’s the spirit of a widow of someone who was hanged in the courtyard, eternally mourning her lost love.

One night a contractor was working alone in the Irish Heather, fixing up the men’s washroom on the ground floor. He placed his tools in the hallway at the back of the pub, near the toilet door. But when he went to grab a tool he needed, all the tools were missing. He looked around and eventually found them neatly stacked by the front entrance.

On several mornings one of the kitchen staff, working alone, heard her name called by a female voice. When she looked around there was nobody there.

In a back storage area near the kitchen, the apparition of a woman dressed in white was spotted a few times by various staff members. Each time she was seen for just a couple of seconds before disappearing.

The third ghost is of a man dressed in black. He was seen a few times by Irish Heather staff, heading down the hallway past the bar and towards the rear of the premises. He’s thought to be the same ghost as the one who used to appear in Blake’s Coffee Parlour, next door. Like the Irish Heather, Blake’s was situated in Gaoler’s Mews (at 221 Carroll Street), and moved out when the building underwent renovations in 2008. In the early 1900s, the Blake’s space housed a popular saloon with a brothel upstairs. The ghost of the man dressed in black was often seen passing through the brick wall between the two spaces. where a door once was. He was usually spotted in Blake’s in the early to mid-afternoon.

One of the spookiest areas in the Irish Heather was the second storey loft. This area served as a restaurant section. Several staff members felt an unnerving presence around the tables near the top of the stairs. And one night after closing, some workmen doing renovations downstairs heard a lot of banging in the loft. When they went up to see what was going on, they found all the chairs at the tables tipped over and lying on their backs. Nobody had been in the loft when the chairs were pushed over. Nobody among the living, that is.

During a quiet Sunday evening, one of the servers chatted with a fellow employee at the bar. Suddenly, they both heard footsteps clomping down the wooden stairs from the loft. When they looked to see who it was, there was nobody there. The loft section had been closed for the night and was empty.

In 2007, a gentleman from Ireland visited the Irish Heather. He sat near the foot of the stairs leading to the loft. He called one of the owners over to him and said, “You know you have a lady upstairs?” The owner thought he was talking about some customers seated in the loft. “No, no, you’ve got a spirit upstairs,” he said. “But you don’t need to worry about anything. There’s a man, too, but he’s not the important one. She’s important.”

Regardless of their importance, there are definitely ghosts in Gaoler’s Mews.