Gabriola House is a classic haunted mansion. It’s the only survivor of many grand homes that once dominated Vancouver’s West End. It was built in 1900-1901 for industrialist Benjamin T. Rogers, founder of B.C. Sugar and its refinery. Many consider it to be the most opulent of all private homes ever constructed in Vancouver.

In its heyday, the property spanned an entire city block. Its outbuildings included horse stables, greenhouses, and work sheds. The mansion itself was built with sandstone blocks, quarried on Gabriola Island. It’s adorned with fabulous stained glass windows and a grand interior staircase.

Legend says there’s an underground tunnel that connected the mansion to a nearby nightclub. This tunnel was reputedly used for bootlegging during Vancouver’s prohibition era. (Coincidentally, this nightclub, at 1215 Bidwell Street, last known as Maxine’s Hideaway, had a ghost of its own. This ghost was reputedly the madam of a brothel that was there in the early 1900s. This building was torn down in 2012 to make way for a condominium high-rise. But its Spanish-style facade was kept intact as a nod to the location’s history.) Benjamin Rogers was an upstanding man and was not involved in any bootlegging, however. And there’s no sign of a tunnel.

After Rogers died in 1918 his widow, Mary, moved into another home. In 1925, Gabriola House became a 20-unit apartment building known as the Angus Apartments (after Mrs. Rogers’ maiden name, Angus). Fifty years on, the mansion was in disrepair and its tenants had all moved out.

In the mid-1970s, Gabriola House was given a face lift and converted into a restaurant called Hy’s Mansion. Hy’s occupied the building for nearly two decades and was highly regarded. Then in 1993 the interior was renovated to create another restaurant, Romano’s Macaroni Grill. Following a fire in 1998, further repairs and restoration work was done. Today, Gabriola House sits empty. In October 2015, it was sold to a local developer who plans to convert it back into an apartment building.

When the house was occupied as Hy’s Mansion, some customers saw cutlery levitate in the air. And when the building housed Romano’s Macaroni Grill, the ghost of a young man was encountered several times. One evening a restaurant manager saw the man standing at the top of the grand staircase. The ghost looked down at him with a blank expression. When the manager started up the stairs, the man vanished.

Sometime later, a sous chef working late one night on his own heard the sounds of someone in the kitchen, banging pots and pans. When he went to investigate, there was nobody there. Only a mess of kitchenware remained. He was so frightened that he raced out of the building.

On another occasion, an interior painter worked alone in the restaurant late one night. While up a ladder, he sensed that somebody was nearby, watching him. When he turned his head he saw an older gentleman standing by the banister of the grand staircase. He asked the man what he was looking for, but the man didn’t respond. The painter descended the ladder to confront him. But by the time he got to the bottom the man was gone without a sound. Like the sous chef, the painter dropped everything and fled the building.

Was this older man the ghost of Benjamin Rogers? This seems unlikely as Rogers was only 52 years old when he died. Perhaps this spirit is of one of many tenants who lived in the building when it was an apartment complex. Or maybe he’s one of the Rogers’ illustrious visitors from 100 years ago, strolling around this most extraordinary property. 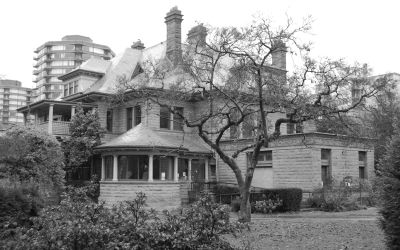