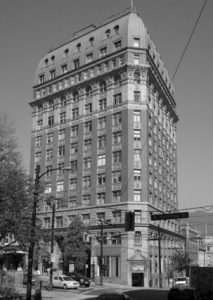 The trapezoidal Dominion Building was Vancouver’s first steel-framed high rise. When it opened in 1910 it was the tallest building in the British Empire.

It was built to house the Dominion Trust, which later became the Dominion Bank. It’s located in the former heart of the city’s financial district. Today, it’s a designated heritage building that houses many offices. These include the headquarters of several non-profit organizations.

Ghostly footsteps are heard on the interior staircase between the seventh and eighth floors. The apparition of a man has been seen there, too.

Some say the Dominion Building is haunted by its architect, John S. Hellyer. He supposedly threw himself down the staircase during the building’s opening party. But this isn’t true. He actually died from a stroke in 1919.

For more on the building’s history, see The Dominion Building by Eve Lazarus.