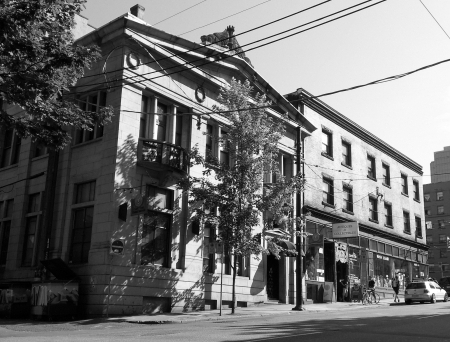 In 2011, Maegan L. sent me an email about her encounter with the sad ghost of the Century House. This Class ‘A’ heritage building was built in 1912 for the Canada Permanent Mortgage Corporation. It was located here until 1951. The building then housed an insurance company office for several years. This was followed by a trade school, an antique store, a book store, and a restaurant. It’s now empty (as of June 2016). The most recent occupant, the Century House Restaurant & Bar, closed in 2011.

The Century House has a beautiful solid granite exterior, with two beavers and a lighthouse cast in concrete at the apex of the roof. It’s an impressive example of early 20th century architecture and construction.

It’s said that early in the Century House’s history, the Canada Permanent Mortgage Corporation suffered an armed robbery. A young bank teller was killed during the holdup. Her distraught spirit haunts the building to this day. Many people feel her presence and hear her crying. Maegan L. is one of these people. In the spring of 2007, she spent time in the Century House as music video cast member. (The music video was for a song called, “The Heist”, by a band called The Tribe. The room that once housed the mortgage company’s vault was used as a bar in the video. Maegan played the part of a bartender.)

Maegan was alone in the downstairs washroom one mid-afternoon, doing her makeup for the video. While there, she felt and heard the presence of a distraught woman. “I heard a woman’s heavy breathing coming from the farthest stall,” Meaghan says. “This didn’t bother me, although I knew I was the only person in the room, and (I) continued about my business until she started to sob. The stall was empty when I went to check.”

Meaghan started to feel emotionally upset, so she left the washroom and headed upstairs. “After a few minutes, I went back downstairs with another girl (from the video shoot), and the crying had stopped. But after another few minutes I could hear the heavy breathing again. The girl I was with didn’t seem to hear anything, though, so I didn’t mention it to her. The experience wasn’t a scary one for me, as I’ve been sensitive to this type of thing for a long time.”

Putting it all together, it’s obvious that Maegan has some natural sensitivity to spirits. And the ghost of the bank teller is so caught up in the shock and despondency of what happened to her that she’s unable to leave the Century House. Research must be done to verify the bank robbery in question – whether it actually happened, when it occurred, and the name of the poor teller who was murdered. In the meantime, my thanks go to Maegan L. for bringing this haunting to light and for sharing her story.