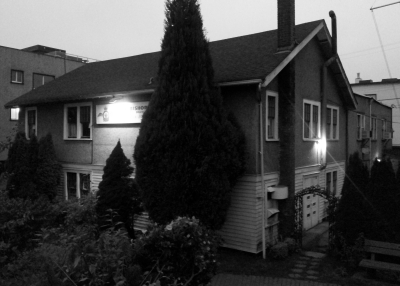 To its members, The Royal Canadian Legion Branch #176 is known as The Billy Bishop, or The Billy. It gets its name from the Canadian World War I fighter pilot. The building, which looks a lot like a two-storey house, was built in 1930. It initially served as a clubhouse for a men’s sports association. Then, in 1947, the Air Force Association bought the building. It has occupied it as a legion ever since.

With a cozy bar on the ground floor and a banquet space upstairs, The Billy is home to the Kits Point Military Museum Society. The interior is decorated with military-themed paintings, prints, memorabilia, and showcases. Wooden airplane propellers are mounted above the bar. And models of the two types of biplanes that Billy Bishop, the airman, piloted are next to the fireplace.

The Billy is haunted by at least three ghosts, possibly four. And because nobody has died in the building, they’re thought to be the spectres of deceased legion members and party-goers.

Much of the paranormal activity occurs in the banquet area upstairs. Over the years, many staff members have heard footsteps, banging, and chairs and tables moved on the floor when nobody’s up there.

The first story of odd things happening at The Billy dates back to 1975. Ted Lewis, then president of the legion, opened the legion one afternoon. As he entered the bar lounge, he heard chairs being moved in the banquet area upstairs. When he went to investigate, no one was there and nothing was out of place.

In the mid-1980s, a man attending a meeting in the banquet area upstairs saw a woman he knew. She stood near a piano, across the room. He was surprised to see her, because he hadn’t for a long time and knew she’d been unwell. Afterwards, he asked a mutual friend how she was doing. The friend told him she had died two years earlier.

In 1998, a bartender was closing up for the night when he and two legion members heard people walking around upstairs. This was strange because they knew that nobody was up there. All three rushed up the stairs to investigate, but the room was empty.

In 2005, legion member, Jim Stewart, visited The Billy with his two daughters. They were the only ones upstairs when his 12-year-old daughter who’d been playing the piano asked her father, “Where did the woman who was listening to me go?” There’d been nobody else there with them.

This woman, of short stature, has also been seen downstairs. One night a staff member working alone in the kitchen on the ground floor saw the ghost. She was so startled by the spirit’s sudden appearance that she dropped the pot she was cleaning. She picked it up and looked back to where the woman was, but she was gone.

On another occasion, a female bartender saw the ghost of a tall man in a grey suit standing near the fireplace in the bar lounge.

Among its several ghosts, The Billy is haunted by the spirit of painter and deceased legion member, Ted Hoskinson. Hoskinson’s unfinished portrait of the King’s Troop Royal Horse Artillery hangs in a corner of the bar. Legion members say he’ll haunt the place until the painting is finished.

A 2006 investigation by the British Columbia Society of Paranormal Investigation and Research into the Supernatural confirmed the presence of three spirits other than Hoskinson’s — the short woman, the tall older man, and a short younger man.

The Billy Bishop Legion offers up a good measure of spirits at the bar and throughout the building.