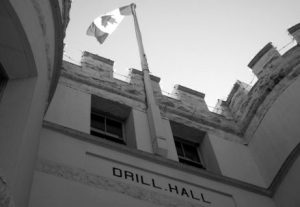 Built between 1899 and 1901, the castle-like Beatty Street Drill Hall is Vancouver’s oldest surviving military drill hall. It has always been the headquarters and training centre for British Columbia’s senior militia regiment, The Duke of Connaught’s Own. Formerly a rifle regiment and now a wheeled reconnaissance unit, the unit saw action in the Boer War, World War I, and World War II.

The Beatty Street Drill Hall is an incredibly well-built structure. Its foundation is constructed of giant granite blocks. Its walls are three and a half feet thick, with a parapet made from limestone. And its front entrance is flanked by two round towers with battlements.

Nobody knows the identity of the ghost (or ghosts) that haunts the Beatty Street Drill Hall. The apparition of a man has been seen in the Senior NCOs’ and Officers’ messes. Sometimes books fall from shelves, and pictures fall from walls for no obvious reason. But more commonly strange and inexplicable noises are heard throughout the building. These include phantom footsteps and voices.