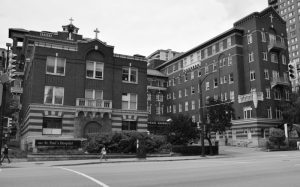 St. Paul’s Hospital is an acute-care health facility that’s been in operation since 1894. The original building was small, with just 25 beds. In 1914 the original structure was replaced by a brick building that added another 120 beds and a surgical department. From that year through 1991, the hospital was repeatedly added to and expanded to become the large complex it is today, with over 400 beds.

Many staff members and patients have experienced weird things in the older parts of the hospital. These include inexplicable electrical disturbances, lights going on and off by themselves, strange noises, disembodied voices, and objects moving on their own. Some have seen apparitions of former staff members and patients. In the Burrard Building, the main building that dates back to 1914, some people have seen phantom surgeries performed in the old operating rooms.